The number of species of sharks, rays and chimaeras, known together as chondrichthyan fishes, facing “a global extinction crisis” has more than doubled in less than a decade, according to a survey published in the journal Current Biology in 2021.

The comprehensive survey funded by the Shark Conservation Fund concluded that, because of overfishing, habitat destruction, illegal trade and climate change, over 31% of the ocean’s sharks were threatened with extinction.

In 2017, the Shark Conservation Fund, formerly known as the Global Partnership for Sharks and Rays announced at the 5th Our Ocean Conference in Malta, its plan to award $8 million over a two year period to support shark and ray conservation around the world.

Following this Commitment, more than 60 grants were awarded in selected countries to protect endemic sharks and rays that are threatened with extinction; promote sustainable trade in shark and ray products through the implementation of management measures for species listed on Appendices I or II of the Convention on International Trade in Endangered Species of Wild Fauna and Flora (CITES); and sustainable fisheries management through regulations adopted by regional fisheries management organizations (RFMOs) such as the International Commission for the Conservation of Atlantic Tunas (ICCAT).

SCF exceeded its 2017 Our Ocean commitment to award $8 million over two years to support shark and ray conservation around the world with an ultimate investment of $10 million that catalyzed an additional investment of $13 million.

This effort netted major conservation outcomes for sharks and rays, including:

“Sharks and their habitats are leading indicators of the well-being of entire ocean ecosystems.” Lee Crockett, Executive Director Shark Conservation Fund. “SCF is well equipped to build on five years of collaboration and conservation wins with a new ambitious Our Ocean Commitment in Palau that will have exponential returns for ocean health and biodiversity.” 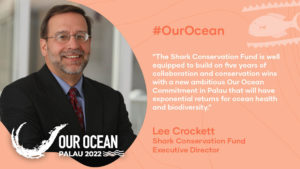